To enable residents to understand the issues and problems which have been encountered on developing the public open space for everyone we have provided information below which includes the consultation results and the reasoning behind some of the decisions.

It is exceedingly difficult to please everybody, as what is good for one is not so for another. Good quality public open space with facilities has been proved invaluable during these unfortunate lockdowns for people’s mental wellbeing and active lifestyles. The Parish Council wants to ensure that is the case here.

Some things have to be provided and carried out as this was agreed with the developer as part of their planning agreement. This also ensured they provided funding - Developers Contributions to carry out these works and enhancements. This is a legal agreement is known as a Section 106 agreement and is for both parties to sign up to. Often it has been proved preferable for the Borough or Parish Council to implement these works to get the best value.

In July 2019, a questionnaire (hard copy) was circulated to all residents of Pembers Hill Drive with responses back by 12 August 2019. There are 73 houses on the development and a total of 29 questionnaires were returned. The results of the survey are as follows: -

*Note these percentages are from the results of separate questions, so therefore do not add to 100

Hire a Building or Venue

The highest scoring type of park in the survey was for a traditional play area with sensory and imaginative play getting equal scores.  We have therefore included this detail into the scope which we have asked the play park providers to develop into options.

Unfortunately, some of the responses contained objections to the principle of the park however this was not the purpose of the questionnaire.  For clarity there is a legal obligation in the Section 106 planning agreement for a play facility. Indeed the questionnaire had an option of leaving the area as a green open space because of initial discussions between EBC and the developer were investigating the possibility of moving the S106 contributions from this site to the larger Pembers Hill Park development, this was later discounted by Planning Officers.

Many residents provided comments within their returned questionnaires, the comments received and the response from the Planning Officers at Eastleigh Borough Council are set out below: -

Comments received from the questionnaire included and response to these from Officers: -

September – EBC approaches Parish Council to accept transfer of the public open space. As the Parish was unaware that the POS included a play area and had not planned for acceptance, the request was refused (formally at Full Council on 15 October 2018).

NB: this development was won on appeal which could account for the lack of knowledge between the authorities.

May – EBC, Drew Smith and Parish Council attend a site visit. Where it is initially agreed that EBC will maintain the land prior to formal transfer pending legal documents. EBC approach Parish again regarding acceptance of transfer of the open space.

July – Parish Council undertake a community consultation to gauge residents’ initial views regarding the use of the Public Open Space.

NB: Initial discussion taking place between EBC and Drew Smith as to possibility of S106 play area contributions being allocated to development across the road. This however is later discounted.

November – Parish Council formally accepts the future transfer of the public open space and to develop the community facilities on site as per the S106 agreement once it became the manager of the land.

February – following a site visit with the P&OS specialist, the Parish Council raises several concerns with EBC & Drew Smith regarding the land and lack of maintenance.

February – socially distanced site visit held between all parties. Agreed that the Parish Council will take on formal maintenance of the site from May 2021 pending the remaining outstanding land and maintenance issues are resolved. (Including a new perimeter fence)

March – Parish Council tenders for play area using results of 2019 survey as well as looking to incorporate a natural look and feel to the play area and a move away from the traditional brightly coloured play area as reported in the 2019 results.

May – results of public vote to be ratified by Full Council and winning contractor appointed.

Can you put a link to the survey results https://www.surveymonkey.com/stories/SM-227W9VXC/ and also a picture of the winning design (attached) and a link to the Council report here

This is the winning design: 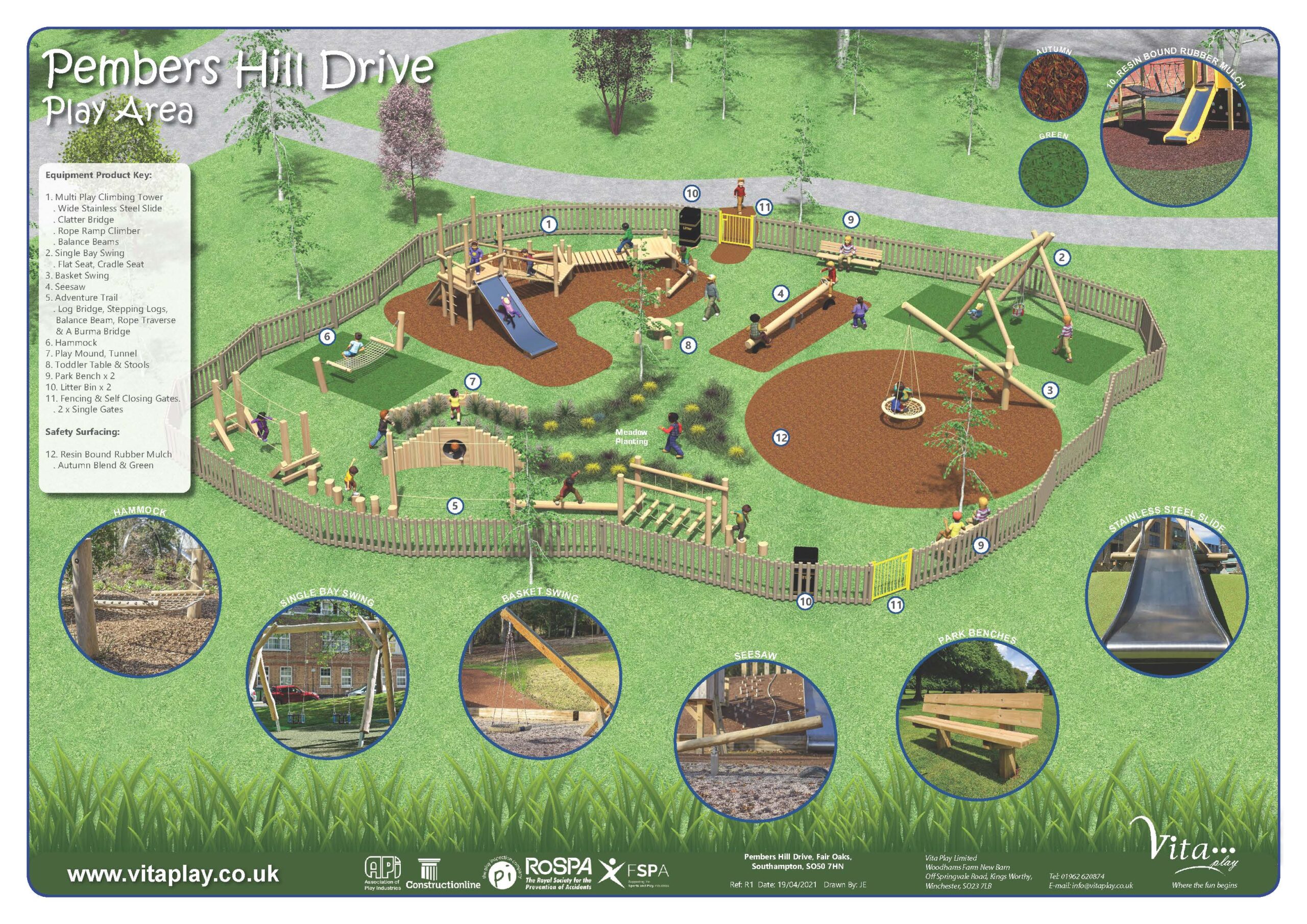 When we bought our property, we were not made aware that the open space would eventually have a play area on it.

Drew Smith as the Developer should have included this in their sales material. The provision of a LEAP standard play area (that is play facilities for children up to 8 years old) is stipulated in the planning documentation, namely the Section 106 agreement.

Why did the Parish Council’s survey in 2019 give residents the option of not developing the public open space?

At the time, discussions were taking place between the Developer, EBC and the Parish regarding the possibility of reallocating S106 monies to the Pembers Hill Farm development across the road. However, this was discounted as legal advisers confirmed that new homes should have access to play facilities within 5 minutes of their home. And the Pembers Hill Farm development was some way off being built. The facilities on this site will also most likely be aimed at older children.

Why did it take so long for the Councils and the Developer to agree a way forward?

At the initial site visits in 2019, the land seemed to be in reasonable condition. However further sites visits and through the support of a specialist, several issues of concern came to light such as: - boundary safety issues, dead & dying trees and planting, concerns regarding the methane pipes, compacted PAN of the soil & drainage.

These issues have now been resolved following joint work between all parties. Meaning both EBC and the Parish could formally accept transfer of the land.

Will the play area take up all the public open space?

No, the play area will be a minimum of 400sqm and will be fenced. Leaving significant space for planting, benches and public art. The play area will also be 30meters away from the nearest property.

I am looking forward to seeing the designs of the suggested wooden play area, there are lots of play areas around so hopefully this will look different.

The Parish Council is very conscious of the number of local play parks and wants to take a theme holistic & measured approach to the provision installed rather than have the same equipment replicated around the area. The designs companies were asked to design a natural play facility with this in mind.

Who will look after the play area and surrounding open space to ensure that it is kept tidy?

The Parish Council’s Operations team will undertake daily inspections and maintenance on the play area to ensure their upkeep and appearance as well as cutting of grass, litter picking and general grounds maintenance.

I am also concerned that our private estate then becomes a location that people who do not live on the estate visit to use the facilities, and there is limited parking on the site.

Whilst the provision is primarily for the residents of Pembers Hill, inevitably others will use the facility. We are not able to enforce parking issues. The facility will have fencing and gates for the children’s safety.

The chunky wooden seats, additional planting and landscaping, local community/BBQ area, and safety fencing are great improvements and welcomed, but I think the wooden play area is a worry.

The play area will be fairly small in scale. It is a legal requirement (part of the planning agreement) that play facility is put on this site. Not putting something on the site isn’t an option.  But views of the community will be taken into account and will have vote in the final design.

There will be some open space remaining to allow informal play/social interaction.  The Council is under a legal obligation to provide play equipment.

This website uses cookies to improve your experience while you navigate through the website. Out of these cookies, the cookies that are categorized as necessary are stored on your browser as they are essential for the working of basic functionalities of the website. We also use third-party cookies that help us analyze and understand how you use this website. These cookies will be stored in your browser only with your consent. You also have the option to opt-out of these cookies. But opting out of some of these cookies may have an effect on your browsing experience.
Necessary Always Enabled
Necessary cookies are absolutely essential for the website to function properly. This category only includes cookies that ensures basic functionalities and security features of the website. These cookies do not store any personal information.
Non-necessary
Any cookies that may not be particularly necessary for the website to function and is used specifically to collect user personal data via analytics, ads, other embedded contents are termed as non-necessary cookies. It is mandatory to procure user consent prior to running these cookies on your website.
SAVE & ACCEPT